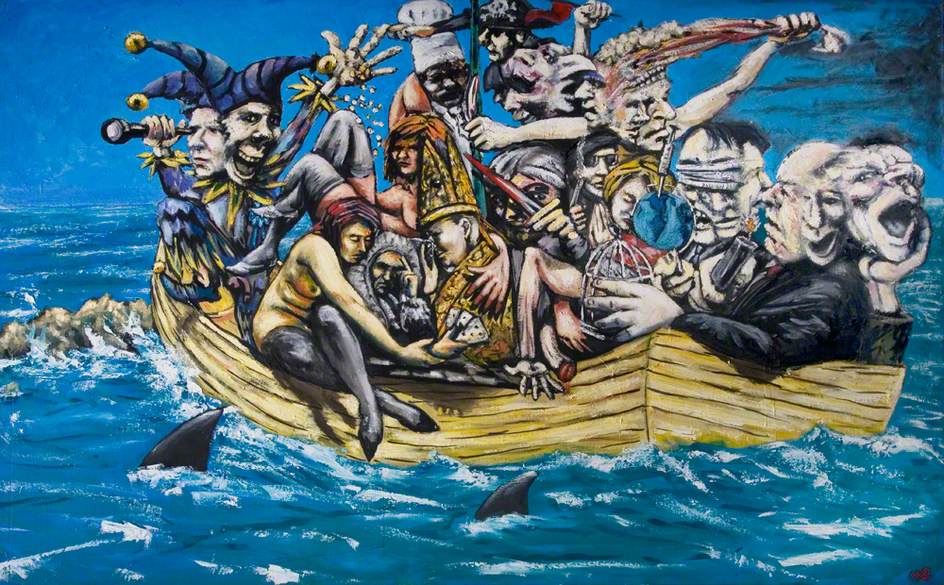 Towards the end of November, we were contacted by Ms. Theresa Buckley, another attorney from the Office of the Treasurer & Tax Collector, who wanted to have more of an informational chat about their request. She had recently joined Cisneros’ office after spending time in the private sector. Her demeanor was empathetic and I got the sense that she genuinely wanted to understand the situation and our perspective and work towards an amicable resolution.

I re-articulated my view on what I believe to be, an overreaching request for private user information, in addition to my broader perspective that at scale, such requests could be detrimental to the entrepreneur-friendly culture that San Francisco has built over the past several decades. I also reiterated the fact that their request wouldn’t uncover any incremental tax revenue since we already rely on SF building permit data to match contractors, who are already required to have a business tax registration certificate number before doing permitted work in San Francisco. Ms. Buckley did acknowledge this point and said she would discuss with her team although she didn’t outright drop their request for information. She did seem intent on assuring us that even if we were to disclose private information to the SF tax collector, they had a strict confidentiality policy to protect any participating companies.

This past week, I was pleased when Laurel Arvanitidis, the Director of Business Development from the Office of Economic and Workforce Development, reached out to discuss our situation. She was incredibly knowledgeable and helpful. After our call, my interpretation is that much of the situation results from José Cisneros’ ability to interpret and execute on San Francisco Tax Regulations Codes – in particular, sections 6.4-1 and 6.5-1, with what seems like impunity.

6.5-1 in particular, seems to give Cisneros the ability to ask just about any company for anything: “Financial information” shall include, but not be limited to, bank records, journals, ledgers and local, State and federal tax returns, and shall include information regarding subsidiary, related, affiliated, controlled or controlling persons in possession of information relevant to the Tax Collector’s inquiry.”

So basically, my current interpretation is that José Cisneros takes 6.5-1 to mean that he can ask any technology company that provides services in San Francisco for just about anything because the definition of ‘relevant’ is so vague.

Fortunately for us, Arvanitidis also informed us that what Cisneros is primarily looking to exploit the tax code to ensure that any business entity in San Francisco is operating with an active business registration certificate. Since we use the San Francisco Department of Building Inspections’ building permit data as a key part of our contractor qualification and matching system, any information on business entities would basically be redundant with information they already have.

While this is favorable to BuildZoom, I still am convinced it creates an unfavorable situation for the many companies in San Francisco, who Cisneros is attempting to pressure into releasing their private user data, which must be frustrating for the Mayor’s office because it basically runs contrary to their mission of making San Francisco a safe haven for entrepreneurs and start-up’s.

Although I haven’t had a chance to meet or speak with Cisneros (he has ignored my repeated attempts to reach out), my impression is of someone who is more concerned with their personal track record when it comes to tax revenues – regardless of the net impact to the entrepreneurs and companies that make San Francisco one of the most innovative and vibrant cities in the country.

I also feel sympathy for the folks in the Mayor’s office who are working so hard to create a favorable environment in the city because they seem to have relatively little influence over how Cisneros chooses to interpret and execute on the tax codes.

Silicon Valley is the mecca of technological innovation in the world, however over the past decade or so, there has been a migration of companies into the city of San Francisco, due in large part to the allure that city living holds for young, talented candidates. Therefore, we moved to a small office on Market St once we had completed Y Combinator in the Summer of 2013.

Since then, we’ve changed offices several times yet remained in San Francisco. It is hard to quantify the value of being able to walk down the street to meet a prospective candidate, partner or investor, face-to-face. In spite of a challenging commute from the Peninsula, I have never regretted our decision to base BuildZoom in San Francisco – until recently.

Last August, we received a request from Simon Galindo, an ‘investigator/tax collector’, working on behalf of the San Francisco Treasurer & Tax Collector, in which they asked for information on independent contractors that provides services of BuildZoom or any related entity.

They cited Article, Section 6.5-1 of the San Francisco Business and Tax Regulations Code, which states:

In addition to a subpoena issued pursuant to Section 6.4-1, the Tax Collector may, at his or her discretion, send any person, whether as taxpayer, alleged taxpayer, witness, or custodian of records, a written request for financial information relevant to verifying, determining or redetermining any person’s tax liability or tax-exempt status. “Financial information” shall include, but not be limited to, bank records, journals, ledgers and local, State and federal tax returns, and shall include information regarding subsidiary, related, affiliated, controlled or controlling persons in possession of information relevant to the Tax Collector’s inquiry. The request shall be mailed to the person’s last known address as indicated in the Tax Collector’s records.

We responded by informing them that we did not engage in a formal business relationship with the contractors who used our service and they certainly were not ‘independent contractors.’ BuildZoom is an interactive computer service that (a.) aggregates and shares information from a variety of third-party resources, and (b) provides access to a computer service through which users may interact with one-another.

Thinking this was a simple mistake on their part, I hopped on a call with Mr. Simon Galindo, which I hoped would clarify things in short order and agreed to comply with their original request to provide information on independent contractors we had employed during the stated period. I was a bit surprised to find that he didn’t seem to care about the fact that contractors on our system were not independent contractors, nor did he care about our status as an interactive computer service. In spite of my assertions, he persisted in requesting our customer data (in addition to reminding us of a fine for not responding quickly enough to a prior request that was mailed to the incorrect address with an incorrect name).

It was at this point in time that I reached out to Jose Cisneros, the San Francisco treasurer in addition to Ed Lee with the following: 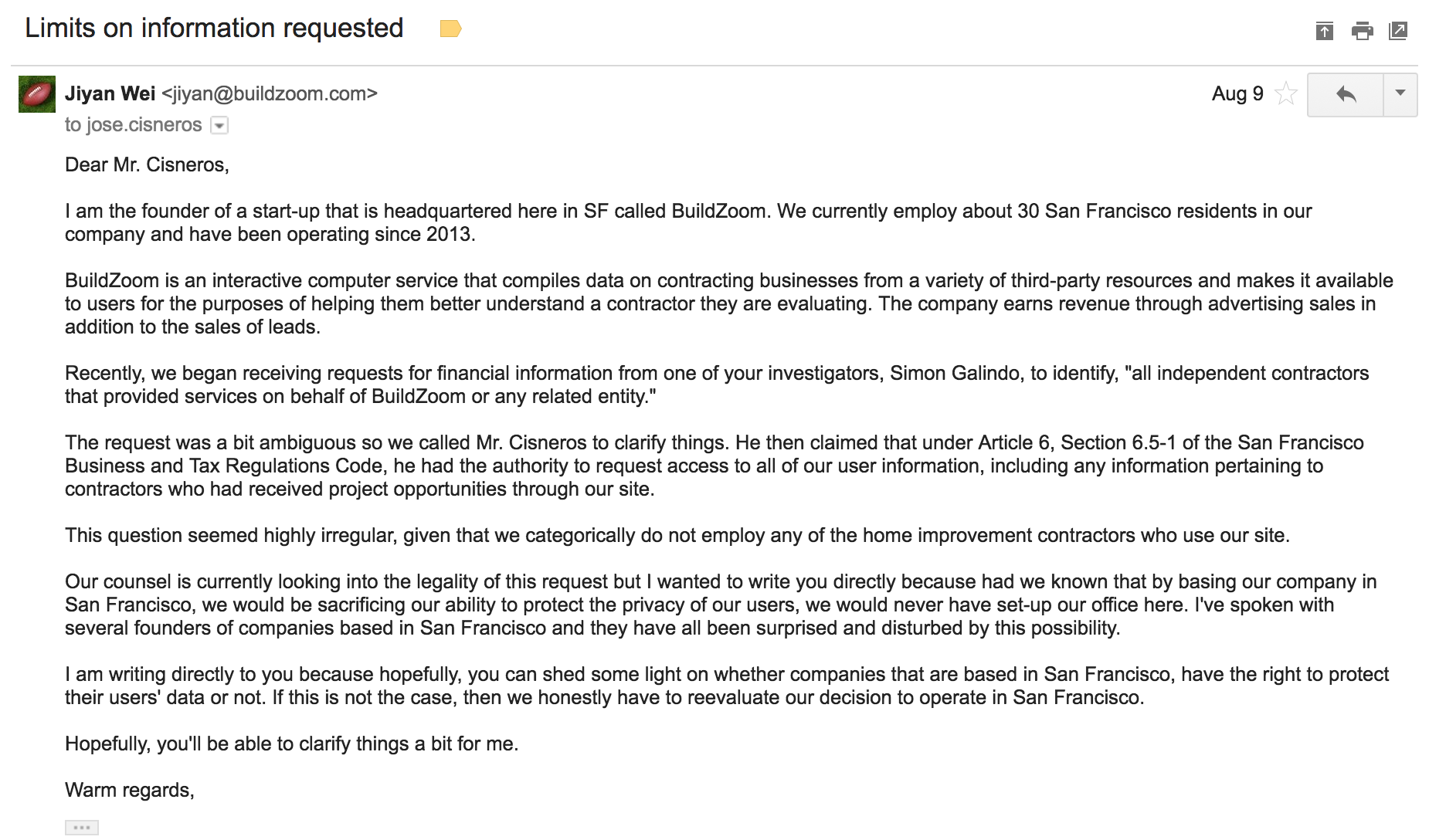 I did not receive a response from either. Operating in good faith and hoping to bring an abrupt resolution to the situation, we did look through our records and found that during the stated time period, we did not actually employe any independent contractors. Our explanation was sent back to the office and several weeks later, we received a follow-up from the office, which stated the following. 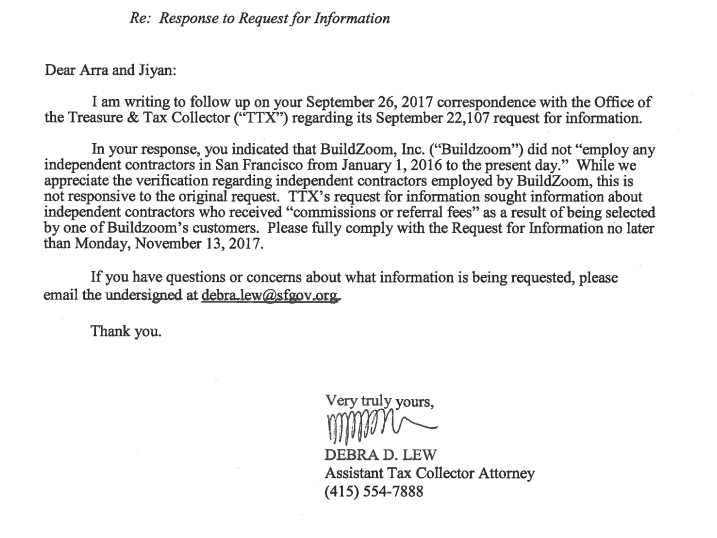 After stating repeatedly that we did not hire independent contractors, I finally got on the phone with Ms. Debra Lew and she consequently informed me that it didn’t matter whether or not BuildZoom had a former relationship with any contractors in the San Francisco, she wanted data on all contractors who had received an opportunity through BuildZoom who were based in SF, in addition to those based outside of SF who may have received opportunities that were based in San Francisco.

After responding that such a request seemed highly irregular because it not only deviated from the original request but also would compromise the privacy agreement we have with our users we are responsible for protecting, she simply responded by saying that she was responsible for protecting the tax payers in San Francisco and if we weren’t going to agree with their written requests, they’d be providing us with a formal subpoena.

Powered by a world-class team, the world’s largest collection of construction data, and an AI-enabled marketplace that is continually learning and improving the quality and efficacy of construction, BuildZoom is the platform upon which the cities and towns of tomorrow are built. Today, we’re doing this by creating transparency and accountability in our marketplace and our underlying mission is to help the millions of people that have been burned in the past. Most recently, we launched a campaign, specifically designed to help those ravaged by the disastrous fires in Sonoma County. We are trying to do good in the world.

Furthermore, we want to embrace San Francisco – after spending years in some of the world’s most prominent cities – London, Washington, DC, Seoul – I can honestly say that San Franciscans have a level of passion and commitment to the world that is unrivaled.

I’m honestly disappointed that instead of supporting its entrepreneurs and tech companies, the City and County of San Francisco is instead, thinking about how to exploit them to collect more tax revenue – even if it means crippling them in the process. I hope my fellow SF entrepreneurs will read this, share it and let your local politicians know that it is just not right.

In the meantime, I’ll keep writing about this situation as it happens.